When Anxiety Has a Power Jam: Ecstasy and Derby

In a conversation with my brother Matt, who is in training to be LOCO London's Head NSO, the topic of panic attacks came up. I had been reading a plot summary of a recent film that dealt with the subject of the end of the world and it had started to trigger my panic response. Because of my medication, I don't get as many full-blown panic attacks these days, but they still happen, and the physicality of even the wind-up is pretty intense. (For the sake of clarity, in my experience a high-anxiety period is different from a panic episode.) With my skin getting hot and prickly and with my stomach feeling like the bottom had suddenly dropped out of it, I focused on my breathing and got through without the panic attack really getting going. After a few minutes, I told Matt what had happened and got a bit teary. He told me to be proud of myself, that I had already gotten myself through it ("The T-Rex passed, it didn't see you, you're just shaky from the proximity" was the metaphor he went for), and that the lingering intensity was only that, not a sign that said dinosaur was coming around again. At least not for a while.

What followed was a conversation in which I confessed something I've never even told a therapist. For me, when a panic attack starts up, there is what I've previously felt was an awful, shameful desire to just let it go, to stop fighting and let the panic take control. It's almost a kind of nostalgia for the sheer intensity of the experience, specifically in terms of the loss of self-control, of being eaten up by something that feels bigger and stronger than me, of admitting my weakness and surrendering. Like an ecstasy in the philosophic sense, of being transported outside of yourself, of being swept up in a dionysian mess. Like a making of the choice to lose the power to make choices.

Lest I be unclear about this, a panic attack is not a pleasant thing. My previous attacks have included mixes of intense abdominal pain, feelings of being paralyzed, intense bodily-clenching that feels convulsive, nausea, weeping, the sense I am immediately about to die, and, on a few occasions, an actual flight from whatever room or building I was in, only to realize there was no place to go. My panic attacks have been the worst experiences of my life, which I suspect is why I felt so ashamed to admit to my brother that some part of me just wanted to get to stop fighting and just let all the awful happen. I don't much go in for shame usually, but I was ashamed of myself.

Of course, Matt understood. I wasn't asking for the awful, I wasn't to blame for the panic attack, but I was recognizing a need, one that I think we all have sometimes, to be radically out of control, to throw up our hands and say, "I am not the one who decides". Maintaining control can be so fucking tiring. We go to large-scale events where we get caught up in the emotions of the crowd, we get drunk, we have orgasms. We need to not always be under our own power and we shouldn't be ashamed.

For me, this is where derby comes into the equation. Is donning a pair of skates the same as attending an orgy? Not so much. But the experience of human bodies jostling for position, sometimes at high speed with wheels strapped to their feet, competing before a crowd can be pretty intense. Derby off-skate life also sometimes includes booze and sexual pleasure, let's be honest. My love of roller derby is informed and shaped by my anxiety disorder in less than positive ways, but at the same time, the actual feeling of flying on my skates can be a well-padded way to experience a little bit of that sense of not being totally under my own power without having to go to an ancient Greek theatrical festival. Naturally, the skaters around me rightly expect some maintenance of my own authority, lest I crash into them, but the principle is there.

So, in the final analysis, roller derby gives us a lot of things we need - camaraderie, feminist spaces, adrenaline and the sheer joy of skating at speed. Not bad for the cost of league dues.
Posted by Meghan Blythe Adams at 09:00 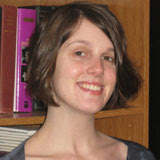